On Tuesday April 24, Dr. Lucy Powell (UCL) came to York University as part of the Prison Fictions and Human Rights Project. Her talk was entitled: ‘The Imagined Self: Identity, Incarceration and the novel in the eighteenth century’. Lucy’s academic profile has soared following the BBC’s recognition of her as a New Generation Thinker and one of the most exciting young academics in her field.

Dr. Powell began by referencing Dostoevsky and his assertion that prison is the dark mirror for society, its shows us who we really are.

Eighteenth century imprisonment was mainly about durance rather than punishment. In London prisons, for example, 75% of inmates were debtors. It was only towards the end of the century that prison became a penal reality and architecturally impermeable. She then spoke more specifically about the prison in relation to the eighteenth century novel. It was during this century that the novel was born, or at least rose to prominence. This coincided with the rise of the self-determining individual, hence the novels often tell only one character’s story and often have names as titles. Powell’s examples were Defoe’s Moll Flanders, Fielding’s Amelia and Richardson’s Clarissa – all of which, like most eighteenth century novels, contain prison scenes. In Moll Flanders prison is ‘hellish’ whereas in Amelia the imagery is much more that of the ‘enchanted castle’, depicted in the language of romance. She then showed us work by William Hogarth which evoked a sense of the moral ambiguity surrounding the state of prisons and prisoners in the eighteenth century.

In conclusion Powell argued that these works all have a uniting theme – the characters are on the move, they are self- fashioning individuals seeking to preserve a subjective identity which prison seeks to strip from them. By raising the idea of the ‘hell mouth’, ‘enchanted castle’ and the mirror, Powell demonstrated how questions of identity are fluid and transitional. In the end, the only repository of truth is the self.  Powell chose to end with a thought-provoking rhetorical question: is individualism the most crippling prison of all?

This Tuesday (24th), Lucy Powell, who is one of the BBC’s new generation thinkers is giving a talk at the Berrick Saul building called Enchanted Castle and the Hell Mouth – Imprisonment and the eighteenth-century novel.

This talk will explore the prevalence and function of imprisonment in the eighteenth-century English novel. Using some of the century’s most influential texts such as Defoe’s Moll Flanders, Fielding’s Amelia, and Goldsmith’s Vicar of Wakefield, it will demonstrate that incarceration speaks to the core concerns of the nascent novel genre: resistance and rebellion, and through these, to an emergent, era-defining individualism. It will illustrate that imprisonment in the novel functions as expression of captivity and as a means of personal liberation, and will situate its fictional findings in a wider, socio-cultural context of eighteenth-century prison reform, culminating, in the final decades, of the century, in the birth of the modern prison system, with the construction of the first penitentiaries. 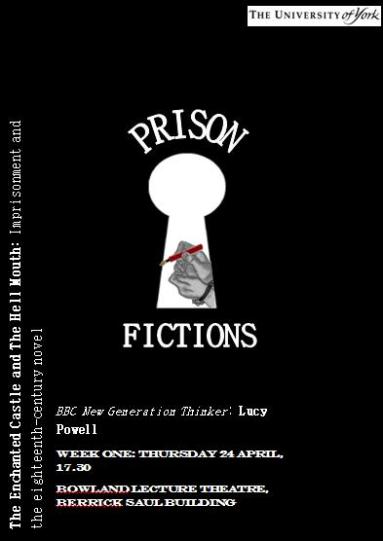 Please do attend if you can make it.It should be a really informative, in-depth talk and I hope you’ll all be around at the beginning of term. The facebook event is below:

Martha Spurrier, a young and highly accomplished lawyer from London is writing a weekly guide to the current laws on free speech within UK law. Please read it – they are succinct and highly informative, nigh unmissable, for anyone interested in coming to the talk by Baroness Jenny Tonge. The link is below, please read and comment to keep this blog vibrant and alive:
http://www.englishpen.org/category/freedom-to-write/