I’ve received an email from Cat Lucas at English PEN.

Sadly, she says that her Middle Eastern Researcher believes 100% that Tal al-Mallouhi is still in prison and that the report of her freedom (below) to be a FAKE used TO UNDERMINE CAMPAIGNS on her behalf. Obviously, then, we’ll continue to follow and support Tal’s case.

PLEASE DO NOT STOP SUPPORTING HER CASE AS A RESULT OF THIS REPORT.

We have heard unconfirmed reports today that Tal al-Mallouhi, named by the Arabic Network for Human Rights Information as “the youngest prisoner of conscience in the Arab world,” has been freed by the FSA. Previously this month, the FSA has been seeking a prisoner exchange for her and Lt. Col. Hussein Harmoush.

Exciting if it’s true – more as we hear it.

This interview with Haithem al-Maleh seems to confirm this news.

According to a member of YorkPEN, this image of Tal al-Mallouhi has been circulating for a few days and apparently shows her in some sort of regime facility outside the prison. If the reports are true, al-Mallouhi will have narrowly avoided the anniversary of her third year in prison after her arrest on the 27th December 2009 – when she was 17 years old – over her political poetry regarding the Middle East.

*The ‘freed’ Tal al-Mallouhi, NOW THOUGHT TO BE FALSE* 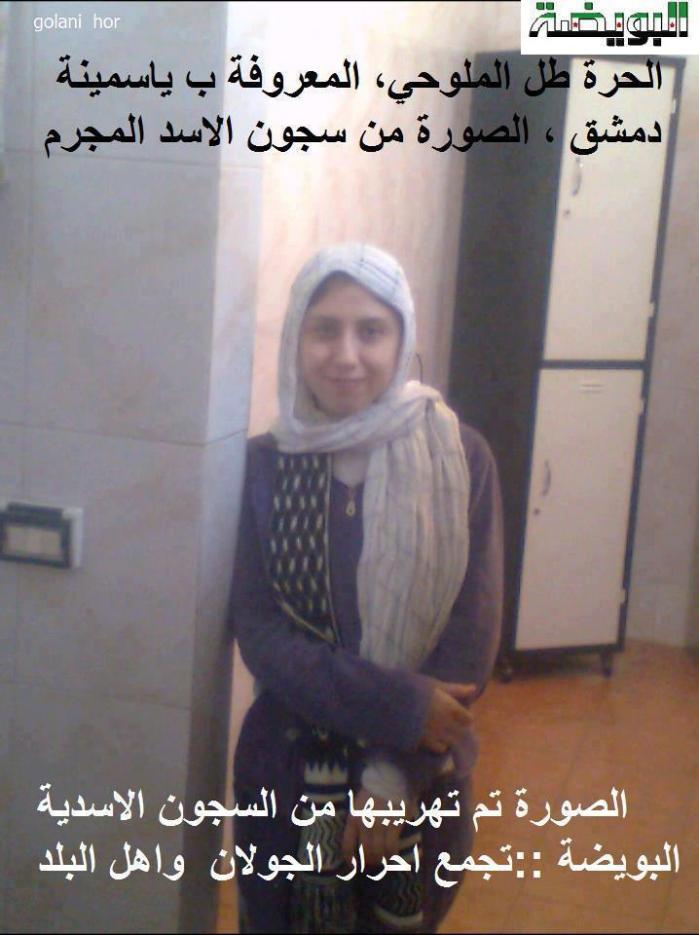 English PEN condemns the five-year sentence handed down on 14 February 2011 to blogger, poet and high school student Tal Al-Mallouhi on the charge of ‘divulging information to a foreign state’. No evidence has been provided for the charge against her. PEN believes that Al-Mallouhi has been sentenced for her online writings and poems in violation of her right to freedom of expression as guaranteed by Article 19 of the International Covenant on Civil and Political Rights, to which Syria is a party. We are therefore calling for her immediate and unconditional release.

According to our information, Al-Mallouhi appeared before Damascus State Security Court in a closed session on 14 February 2011, and was convicted and sentenced to five years in prison. The court did not disclose any evidence or details of the reason behind the verdict, and it is widely believed that she has targeted for her online poems and writings on political and social issues. The State Security Court’s verdict is final, and there is no possibility of appeal.

Al-Mallouhi was arrested on 27 December 2009 after being summoned for questioning about her blog entries. After her arrest, state security officers raided Tal Al-Mallouhi’s family home and confiscated her computer, notebook and other personal documents. She was held incommunicado at an undisclosed location without charge or access to her family for the first nine months of her detention. Her family was allowed to visit her once at Doma prison in Damascus on 30 September 2010. Initially, Al-Mallouhi’s family had sought her release through diplomatic negotiations and therefore did not want any publicity on the case. However on 2 September 2010 her mother published an open letter to the Syrian president seeking information about her daughter’s welfare and calling for her release. On 5 October 2010 it was reported that Al-Mallouhi had been charged with spying for a foreign country. Al-Mallouhi has no known political affiliations, and sources close to the family are baffled by the charges. It is feared that she could be targeted for comments and poems published in her blog (http://talmallohi.blogspot.com).

I will walk with all walking people

I will not stand still

Just to watch the passers by

This is my Homeland

In which  I have

A drop in a cloud

And a grave to protect me

This is more beautiful

Than all cities of fog

Do not recognise me

Even for one day

To build the “republic of feelings”.